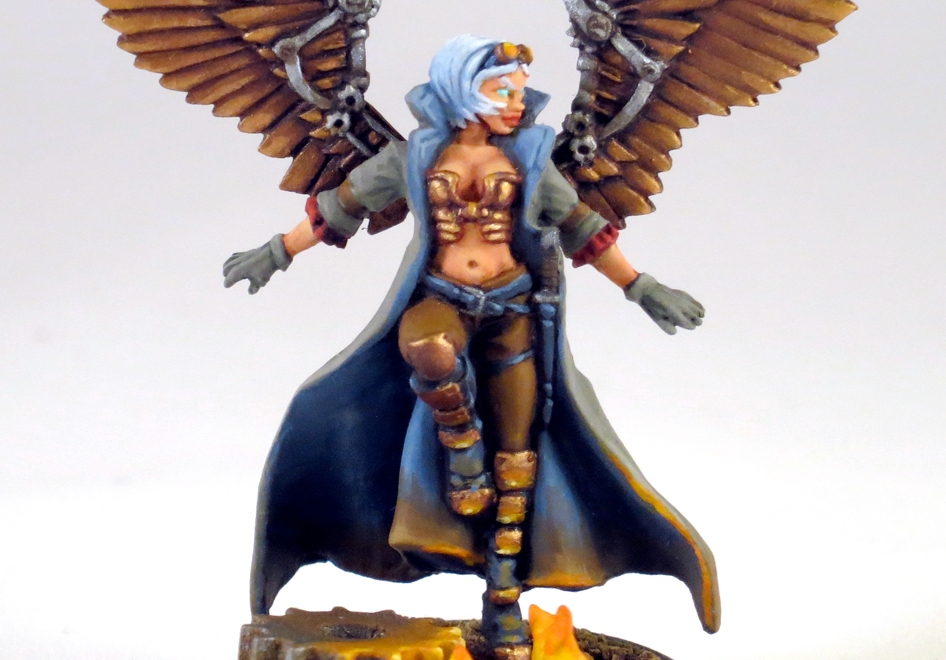 This weeks installment features the fire wielding, winged, sexy lady,  Kaeris. She’s a lot of fun to play with and a real pleasure to paint. For her crew box I tried to keep the cool gray color scheme I stared with my Ramos crew, but with a little twist. I added some gray to represent their M&SU Asset affiliation and of course, some flame effects where appropriate. Me likey!

So, here’s the lady of the hour. I’m really pleased of with the fire effects on her base. It took a few tries to get them just right, but I finally came up with a very easy technique using tweezers and a twist. I was tempted to sculpt flames in her hands as well but I was afraid they’d look like big globs of ice cream. That and I was feeling lazy. 😛

Anyone who’s fielded Kaeris as a Henchman knows who this little guy is. He follows around his Master learning the ways of combat and how to become a powerful magi. Fear him! I wish I could say it was a joy painting him up, but I honestly found him kinda boring. I guess sometimes a model just rubs you the wrong way.

Yet another fun little construct minion to add to the Arcanist arsenal. I painted each of these models at least twice before I found a color palette I liked. First I tried red skin, then brown, and black. I finally decided on gray. It ties in better with the overall color scheme of the crew. Then for the flames I tried blue, orange and purple before I stuck with yellow. I’m particularly fond of Ken to the right. Hadouken!

The Gunsmiths are a great unit. They’re versatile, survivable and excellent marksmen. Plus, the models are bad ass! It would suck for the male if he had a spontaneous misfire on those guns under his neck.”Woops I tripped over this rock!” BLAM… POP!

“Hi! I’m Iggy. Wanna play with me?” FWOOSH! “I done burnded you fool!” I’ve only played one test game with Iggy. He’s interesting but I have a hard time squeezing him into my Kaeris crews. Looking at this picture makes me think he might need something a little extra on his base… more flames! 😀

Well, there you have it. My Kaeris crew. Hope this inspires you to try out some fire effects for you models. Next week, Mei Feng. WAAPA!!

The Art of Dave Monty The Mini Painter