“The Nomads consist of three enormous ships whose inhabitants, discontented with a society controlled by huge macroeconomic blocks and by A.I., have separated themselves from it and roam through space, trading from system to system.”

-Fiction from Infinity the Game

I started working on my Corregidor boxed set that I won from the Infinity O-12 podcast. These Nomad models have a much more sci-fi look than the Haqqislam stuff I’ve been painting recently. So, I wanted to go with a very bright and bizarre color scheme that looks more alien. Check out my prototype. 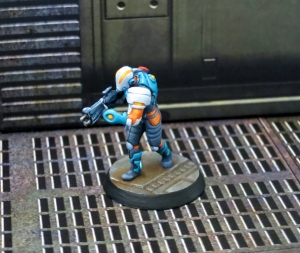 The Corregidor box comes with three Wildcats so that’s where I decided to start painting. I usually like painting the grunts of my armies first to get a feel for the color scheme and composition. Plus I’d rather screw up on one of these in the beginning than one of the other more unique minis later. The prototype model is where I create the “rules” for my color scheme and always takes the longest to finish. Once it’s done, the rest of the models come along a lot quicker… in theory. 😛 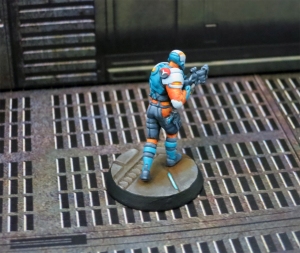 You might not be able to tell from these pictures but I painted this little shit three times before I was satisfied with a color scheme. Thus, there is some loss of detail, particularly in the orange ribbing. My first concept was purple, blue, white and bright green for the lights. Then I went with mostly white, aqua, khaki and orange lights. With some help from my wife I ended with this. Very pleased!